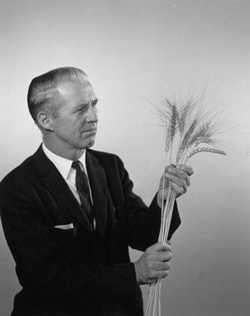 Norman Ernest Borlaug (March 25, 1914 – September 12, 2009) was an American agronomist, humanitarian, and Nobel laureate who has been called “the father of the Green Revolution.” Dr. Borlaug was one of only six people to have been awarded the Nobel Peace Prize, the Presidential Medal of Freedom and the Congressional Gold Medal.

Dr. Norman Borlaug dedicated almost six decades to the ending of world hunger and to the acceleration of agricultural productivity in the developing world. He talked to more peasant farmers and visited more wheat fields than any living person. Dr. Borlaug was awarded the Nobel Peace Prize in 1970 for his lifetime of work to help feed the hungry world.

Born in Iowa, Dr. Borlaug studied plant pathology at the University of Minnesota and was awarded his doctorate in 1941. Between 1944 and 1960, Dr. Borlaug served as the Rockefeller Foundation scientist in charge of wheat improvement under the Cooperative Mexican Agricultural Program. He later acted as a consultant to Mexico’s Ministry of Agriculture, and was assigned to the Inter-American Food Crop Program as an associate director of the Rockefeller Foundation.

I am but one member of a vast team made up of many organizations, officials, thousands of scientists, and millions of farmers – mostly small and humble – who for many years have been fighting a quiet, oftentimes losing war on the food production front.
Norman Borlaug

With the establishment of the International Maize and Wheat Improvement Center (CIMMYT) in Mexico in 1963, Dr. Borlaug assumed leadership of the Wheat Program, a position he held until his official retirement in 1979. He remained a resident part-time consultant until his death. He has spent most of his working life in Mexico, where he undertook the painstaking research to develop new types of high-yielding, disease-resistant wheat varieties. These new wheat varieties and accompanying improvements in crop management practices revolutionized wheat production in Mexico since the mid-1950s.
By the mid-1960s, Dr. Borlaug was taking the technical components of the Mexican wheat technology to Asia, sparking the so-called “Green Revolution” in wheat production in India and Pakistan. Between 1964 and 2001, wheat production in India rose from 12 to 75 million tons, while wheat production in Pakistan increased from 4.5 to 22 million tons. The Green Revolution in food production made possible by Dr. Borlaug’s work has touched the lives of farmers in other parts of Asia, as well as in Latin America and even many developed countries.

In 1983, Dr. Borlaug joined as a Distinguished Professor of International Agriculture at Texas A & M University. In 1988, he became President of the Sasakawa Africa Association and a Senior Consultant to Global 2000. From 1990-92, he was a member of the U.S. President’s Council of Advisors for Science and Technology.

He also served on many advisory boards, including the international juries of the annual World Food Prize, sponsored by the John T. Ruan Foundation, and the annual Africa Prize for Leadership for the Sustainable End of Hunger, sponsored by the Hunger Project. He has been honored by governments, universities, scientific societies, and farmers’ associations in more than 30 countries.

The Borlaug Summit on Wheat for Food Security (25-28 March 2014 in Ciudad Obregón) celebrates Dr. Borlaug’s life and legacy and also brings global hunger stakeholders together in a “call to arms” for the next Green Revolution.